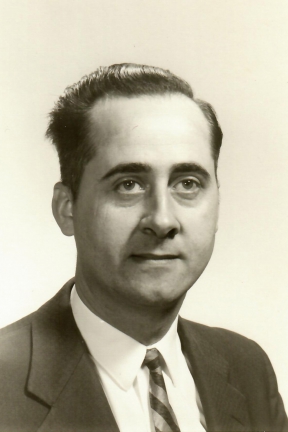 A Second World War Veteran with the Canadian Navy, Raymond George Gross passed away in his 96th year on Friday, October 23, 2020.

Raymond was born April 23, 1925, the younger son of the late Henry and Annie (Holler) Gross. Professionally, Ray was a Teacher and Principal at Louise School in Bentinck Township and Salem School in Culross Township, Teeswater. When he moved to Niagara Falls, he became Principal of Lyons Creek School and finished his long teaching career at King George in Chippawa. After retiring, Raymond pursued his interest in Architecture, Planning and Construction, and has several fine brick houses to his credit. Ray received a Service Award from the Province of Ontario for his contribution with Master Gardeners of Ontario, Simcoe Group. He was a member of the Royal Botanical Gardens for over 25 years. For many years, Ray enjoyed square dancing with three district clubs, his favorite hobby was travelling in his motorhome to destinations: Newfoundland, Inuvik, Alaska, through Central America to Panama and abroad.

Raymond Gross is survived by his wife Ivy (Hopkins) Gross, whom he married on August 16th, 1949, forming the teaching team. Also survived by several nieces and nephews. Ray was predeceased by his parents, his sister Esther (Ivan) Heipel and his brother Walter (Margaret) Gross and his nephew Gordon Gross.

As per the provincial regulations and COVID-19 restrictions, all visitors are requested to wear a mask when inside. The maximum number allowed at any one time is 40 people including immediate family. All social distancing measures will be taken.

Memorial donations to the Hanover & District Hospital Foundation would be appreciated as expressions of sympathy.