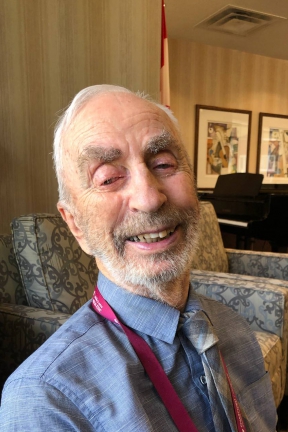 William Norman Peppler, of Ottawa, passed away at the Ottawa Hospital’s General Campus on Thursday, April 1, 2021, in his 96th year.

Born in Hanover on June 29, 1925, to the late Norman and Lillian (nee Youngblut) Peppler, Bill was a man with a diversity of talents. With a great inclination towards music, he played many instruments, and was particularly talented with his saxophone and clarinet. He performed as a professional musician in his late-teens and early-twenties, touring around Southern Ontario as part of Hanover’s popular Frankie Banks Orchestra. While training in the Canadian Army towards the end of WWII, he signed-up as a bandsman where, most notably, he entertained troops returning from overseas services. His love for music never wavered; big band music was forever dear to his ear. His family home was clustered with instruments, and rarely was there a day that he didn’t conclude with a melody on his organ before bedtime. Greater than his passion for music, however, was that which he had for flying. He was drawn to the sky by the early exploratory years of aviators who instilled in him the spirit for freedom and adventure that aviation brought. He knew from an early age that aviation would be his career path; and that path is the one he duly followed. Bill flew many different aircraft over a long and fulfilling aviation career. After working his way through flight training, he became an instructor himself, working as the latter at Ontario’s Goderich Airport, where he also served as the facility’s general manager. Bush pilots were still opening Canada’s vast regions at the time; a chance meeting led to the opportunity to become a bush pilot himself with the now-revered Spartan Air Services. After seven years and thousands of hours of often high-risk aerial activities with Spartan, he settled into working as the general manager for the Canadian Owners and Pilots Association, (COPA), a position he held with endless enthusiasm for 39 years. Co-incident with his long COPA tenure, he quietly went about developing the well-regarded aeronautical ground school textbook, From the Ground Up, with which he worked tirelessly with his wife, Isabel, the title’s editor and publisher. His years of exploration as a bush pilot in Canada’s northern regions led to a river and lake being named after him on the Quebec-Labrador border. As much as aviation was his great passion, family and friendships were his greatest passions above all. He will be fondly remembered for his engaging smile, his bountiful enthusiasm, the warmth of his personality, and his unworldly positivity. He will be dearly and profoundly missed by all those who knew him.

A Public Visitation will be held at Mighton Funeral Home, Hanover, on Wednesday, April 7th, 2021, from 7-8:30 pm.  Due to COVID 19 regulations, guests must call and register to attend – please call the funeral home during business hours to register (519-364-3660).  All guests will be required to wear face masks and socially distance.

A Private Family Funeral Service will be held on Thursday, April 8, 2021 at 11 am, at Mighton Funeral Home, Hanover. Rev. John Polacok officiating. The service will be live streamed on the funeral home Facebook page for those who wish to join - https://www.facebook.com/Mighton-Funeral-Home-Ltd-109625187108921  Interment to follow in Hanover Cemetery.

Memorial donations to the Air Cadet League of Canada, or the Saugeen Valley Conservation Authority Foundation - Memorial Tree Program, would be appreciated as expressions of sympathy.