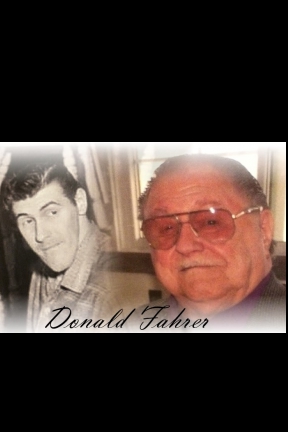 We, the children of Don Fahrer, became orphans on October 28, 2021, one month shy of his 88th birthday.  Dad just couldn’t wait any longer to be reunited with Mom, having gone eight long months without seeing Grace.  Dad passed away peacefully, surrounded by his loved ones.  Dad reminded us before he left, that there wasn’t a single day he didn’t think of his son Jamie who passed in 1974.  Dad also requested that we continue to celebrate our weekly Happy Hour every Friday because family was everything.  This is where the stories are told.

Dad was born in Cargill and after a brief stop in Waterdown, spent the remainder of his life in Hanover.   He was clearly a “homebody” and a softy who welcomed all strays, four legged or two.  Dad was always a hard worker starting full time work at the age of fifteen at Knechtel’s Furniture where he remained until it closed.   Here he could put to work his often annoying meticulousness doing assembly work – his favourite task.  We remember groans of exasperation from Mom when Dad would wipe the counters right after she had just completed the task.

Dad loved a good card game, especially at family gatherings. These games always included the exchange of money and bragging rights, especially with their long time Euchre partners Bill and Gail.  Dad loved lotteries, scratch tickets and the slots.  His one major disappointment in life is he didn’t win the BIG ONE in the weekly lottery although there is still one more draw with his name on it.

Dad loved Elvis!!  Have you seen his hair cut?  Christmas Eve included the ritual of his imitation of Blue Christmas belted out alongside Bill and Dawson.

Dad loved his home on 11th Avenue and took great pride in his well groomed yard, flower beds, and garden where the grandkids would raid the pea patch every year.  He loved hosting many ball team parties under the big 60 year old maple tree that they planted.

Dad was an avid sports fan.  As a young man he loved playing centre field and coaching the girls’ baseball team.  He was our number one pitching coach from the sidelines and the backyard using “throw strikes” as an effective coaching tool.  He was an avid 5-pin bowler for over 30 years in two leagues.  His shining moment was a single game in the 1961/62 season scoring 423 – so close to the perfect 450.  This trophy sits proudly in his home and was the topic of much boasting.  Mom and Dad enjoyed their Thursday night mixed league.  As kids we were less than impressed by the late night parties afterwards. His favourite pastime was watching the Blue Jays but especially his man-crush, Mitch Marner, and the Leafs!

Dad was funny (joked right to the end) and instigated spirited banter with his children, especially son-in-law Barry.

Dad and Mom are now reunited for eternity able to enjoy Happy Hour together once again.  Dad’s first words to Mom will surely be “Mummy, nobody could cook as good as you”.

We wish to thank Dr. Batten and Dr. Horsfall and the always compassionate Care Partner nursing team of Maddie, YuMing, Julia and Susan.

Please join us for a celebration of life on Saturday, November 13th at Don’s home 301-17th Avenue Unit 2  from 1 – 4 p.m.  In lieu of flowers, memorial donations can be made to Cystic Fibrosis Foundation or the Canadian Cancer Society or a charity of one’s choice as an expression of sympathy through Mighton’s Funeral Home.