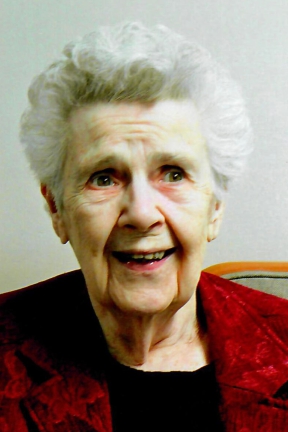 Anna Melvina Munro, of Walkerton, passed away at Brucelea Haven, Brockton on Sunday, January 9th, 2022. She was 96.

Anna Melvina Leaman was born at home in Boston Massachusettes on December 18th, 1925. She was the third child for James and Nellie 'Ellen' (nee Hamilton) Leaman. Unfortunately, her Mother passed away just three months later. Caregivers were unreliable in 1925, and too many times James Leaman would return from work to find his ten year old son James and eight year old daughter Ellen looking after Anna. Eventually James' oldest sister Mary arrived from Moncton, N.B., and it was decided she would take Anna, at 9 months of age, back with her on the train to Moncton to stay until she was school age.

Anna never returned to live in Boston. She grew up in Moncton and referred to her Aunt and Uncle as Mother and Dad and was known by their name Dixon. Over the years she made many trips to see her Boston family, but her world was definitely in Moncton. Anna was a vivacious and determined young woman who caught the eye of a returning military serviceman named James Munro. They were married September 6th, 1947.

During his service, Jim was transferred a number of times. During their years in Halifax, they adopted their daughter Peggy in 1953, and son Ian in 1956. Anna was a talented sewer, decorator and sales person, but she was most proud of the years she dedicated to taking care of her Uncle as he aged and developed dementia, and her son Ian who lived at home until he was fifty-two before moving to a long term care facility.

Even as our Mother was overtaken by Alzheimer’s, we knew she was lovingly looked after at Brucelea Haven - the staff are to be commended for their care provided and the challenges they face each day as residents grapple with each stage of dementia. Thank you.

An invite only Memorial Service will be held on Friday, January 14, 2022 at St. Paul’s United Church - 303 Jackson St S, Walkerton, at 11 am. The service will be livestreamed through the Mighton Funeral Home Facebook page:  https://www.facebook.com/Mighton-Funeral-Home-Ltd-109625187108921  The live stream will start approximately 5-10 minutes prior to the service - at that time, please look for the live stream video post on the Funeral Home Facebook Page to join the service.  For people unable to join at the time of the service, the live stream video will remain posted and available for viewing afterwards, and will also be posted on the Funeral Home obituary page afterwards.

Memorial donations to the Brucelea Haven Activation Fund or to Saugeen Hospice would be appreciated as expressions of sympathy. Arrangements entrusted to the care of Mighton Funeral Home, Hanover.