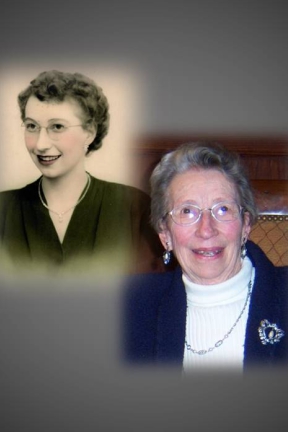 Joan Hundt of Hanover, passed away at Hanover and District Hospital on Monday, January 17, 2022.  She was 91.

Born in Walkerton, on February 10, 1930, daughter of the late Frank and Georgina (Ernst) Graf.  Joan started her career at Cartright’s Shoes in Walkerton, and then she accepted a position in the office of Truax, where she worked for 7 years before dancing her way into Gerard Hundt’s heart.  She left her town life and became the enthusiastic farmer’s wife of Seldom Rest Farm on the South line of Brant.  Along with raising their six children with love, she shared her love of music and baking and became known for her maple syrup tarts. Gardening, canning and sewing children’s clothes late into the night was all part of routines that gave her much joy and fulfillment.

Joan was a 50 year member of the Catholic Women’s League, and generously volunteered in many of church and community organizations over her years on the farm, as well as when they retired in Hanover.  Also alongside Gerard, she assisted with his involvement with the Knights of Columbus.

A public visitation will be held at Holy Family Church, Hanover, on Thursday, January 20, 2022, from 9:30-10:45 am, where a Funeral Mass will be held at 11 am. To attend the visitation or funeral mass, please call the funeral home between 8am and 6pm at 519-364-3660 to reserve a time slot. For those unable to attend the mass, it will be live streamed through the church’s website at www.holyfamily.ca/media. Archbishop Peter Hundt and Father Emmanuel Azike officiating. Spring Interment in St. Francis Xavier Cemetery, Carlsruhe.

Memorial donations to the Holy Family Church or St. Francis Xavier Cemetery, Carlsruhe would be appreciated as expressions of sympathy.