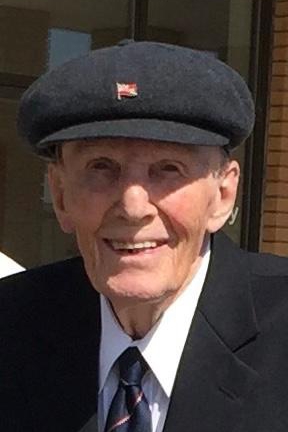 Herbert Alfred Smith, passed away peacefully at St. Mary's Hospital, Kitchener, on Wednesday, May 04, 2022, just shy of his 100th birthday.

Herb was born in Edmonton, Alberta on September 11, 1922 to the late Harold and Florence (nee Hancock) Smith.

Herb was a Flying Officer and Navigator in the Royal Canadian Air Force in WWII.  During the war, he was attached to 158 Squadron (Bomber Command, Lissett), taking part in night raids over Germany in a Halifax bomber and saw the war end back in Canada while he was training for the Pacific Theater.  He was very fortunate and grateful to be able to come home when so many did not, including his brother Doug, who served in the Lincoln and Welland Regiment.

After the war, Herb attended the University of Toronto where he achieved a Master of Arts in physical geography.  He married Eleanor in 1950 and subsequently worked in government positions, notably with Planning and Development at the Province where he worked on notable projects including the establishment of the Heart Lake Conservation Area.  After a period, he returned to university and gained his teaching certificate.  He taught high school geography for a number of years in Scarborough and then ultimately secured a position at Chesley District High School as Principal in 1967 and where he rounded out the rest of his career.  He will be fondly remembered by his colleagues as well as the many students that passed through CDHS doors during his tenure.  In Chesley, he was an active member of the Rotary Club and the Anglican Church.  Later on, he was very active in the Hanover branch of the Royal Canadian Legion.

Memorial donations can be made to the Bluewater Education Foundation (for which he was instrumental in acquiring the property for the Outdoor Education Centre on the Bruce and for which the funds would be used), the National Air Force Museum of Canada Foundation (Trenton), or the Canadian Warplane Heritage Museum (Hamilton).  Herb visited the restoration of the Halifax bomber in Trenton a number of times and was overjoyed to see it completed.

To honour his wishes, cremation has taken place and a private family graveside celebration of life will be held. Funeral arrangements are entrusted to the care of Mighton Funeral Home, Hanover.

My sincere condolences to all of Herb's family. He was truly a gentleman and a good friend to my parents thru St. James Anglican Church in Hanover. He was very kind and caring and was and will be truly missed. Wendy Baines Gateman.

Herb was always the gentleman, and a very wise principal. I always enjoyed talking to Herb when we crossed paths. My condolences to the family.

My deepest condolences to the Smith family and my personal thanks to Herb for his service to Canada in the RCAF and as the principal at CDHS.
Alex Ruff, MSC, CD, MP
Bruce-Grey-Owen Sound
CDHS alumni

I always felt Herb was a man of integrity who was wise, interested, and caring. He had a remarkable life that impacted many! I loved that he enjoyed chats with my dad who also flew with the RCAF. Alan and I will remember him fondly.

Dear Anne, Graham, Paul, Fraser and family,
We were so sad to hear of Herb's passing last week. Herb and Eleanor were terrific neighbours and we shared lots of stories and laughter over the years. We especially enjoyed our annual Open House for the seniors in our neighbourhood., even if it meant that Brian had to shovel a pathway on the road for them to get to our driveway. As well, the four of you were always so good to us, keeping us informed and we often felt like part of the family. Our condolences are with you all.
Love, Brian and Susan Sakal

We are greatly sad to hear of Herb's passing. He was a wonderful friend. Our family loved seeing Herb & Eleanor at church. Herb loved sharing his flying adventures with the Scouts and always wanted to know what adventures were happening with them. R.I.P. Herb and hugs to all.

It is with great sadness that I read about Herb's passing. "Mr. Smith" hired me at CDHS in 1982. I was fresh out of teacher's college and he took a chance on me. Herb was a great role model as my first principal. He was a man of integrity who was passionate about geography. I had a long and rewarding career in education and I attribute that to the great Herb Smith. Thank you Mr. Smith. Rest on peace.
Alana Murray

CONDOLENCES TO THE SMITH FAMILY. ONLY THE FONDEST MEMORIES OF ELEANOR AND HERB. TREASURE YOUR MEMORIES AS THEY WILL SUSTAIN YOU IN THE FUTURE !! RIP HERB

Dear Ann and family,
I extend my sympathy to all of you
Your Dad had a very interesting life
Lots of memories for you

Condolences to the Smith family….. Your Dad was the best Principal ever at CDHS! We all loved him. May all your good memories and the love, care and support you have from each other help you to journey through this sad time.
Dave & Lorna 😘

Our sympathy to the Smith family. Herb was a respected colleague, an efficient leader and fellow geography major.
May your many good memories sustain you during this difficult time.

My condolences on the loss of Herb. We have lots if good memories of our time at St. James. Such a pleasure to get to know Herb and Eleanor. Take care of each other, Barb McCallum

Dear Anne, Graham, Paul, Fraser & families,
It was with sadness we read of Herb's death, even though living 99 years is something to be celebrated. Herb interviewed me on a winter's night in 1971, responding to a call from the pay phone by the Bijou in downtown Chesley. He said "meet me at the High School in 10 minutes." He met me dressed in a plaid shirt, wearing slippers. We had a delightful conversation, which marked the beginning of a 30 year career as a Math teacher at CDHS. His kindness to me and Marion will never be forgotten. Our sincere condolences on the death of your father.