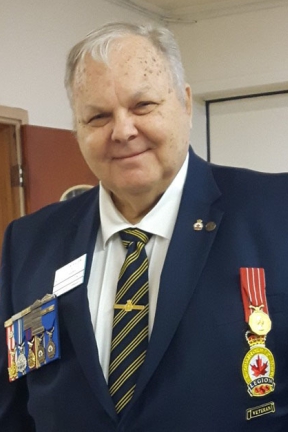 It is with sinking hearts that we announce the passing of our Dad and Opa, John William Kollen, of Hanover. Dad passed away at the Guelph General Hospital, on a sunny day, July 28th, 2022 at the age of 73.  He had at his side special invisible old friends, Phil and Brien.

Born in St. Catharines, Ont., on the 23rd of April 1949. He was the son of the late Koob Kollen and Arendje (Nieuwenhuis) Kollen.  Dad was passionate about his time at sea with the Navy and was proud. He served:

Dad/Opa, will be greatly missed by his children, Lisa, Martin (Rose), Dion (Kathleen), and grandchildren Megan, Reiner and Heyden. He was also survived by his daughter Jo Anne and his special nieces and nephews from all over Canada and the world.  Also surviving John are his two younger sisters Althea (Hans), Dini (Steve) and younger brother Dennis (Hilary).  They are now dreading knowing the Kollen sibling expiry date.

Dad enjoyed life to the absolute fullest up to his final days.  He enjoyed drinking, carousing, eating fine foods and talking.  Yes, he enjoyed talking, sometimes too much.  One great regret Dad had was that he never got to see his beloved Montreal Expo’s win the World Series, even though the Cubbies won while he was relatively still young.  Dad’s sense of humor, enormous personality, generous heart and unique sayings are going to be missed.  He will also be remembered for living his life without fear and his incredible devotion to his family and friends. The family would like to thank everyone who has reached out to offer their condolences and support.

To honour his wishes, cremation has taken place and committal will take place at sea at a later date.  A Celebration of Life will also be held at the place he loved most- The Royal Canadian Legion in Hanover at a later date.

Memorial Donations in Johns' memory can be made to the Hanover Legion- Poppy Fund or to a Church of your choice. Arrangements entrusted to the care of Mighton Funeral Home, Hanover.

May there be “Fair Winds & Following Seas”

When my sailing days are over,

and I sail the seas no more,

I shall build myself a refuge

by the ocean's murmuring shore.

As I watch the foaming breakers

when the tide comes rushing in,

I will contemplate my lifetime

With it's virtues and it's sins.

Where the azure of the heavens

where the sweeping, soaring seagull

flies it's endless quest for food.

It is there that I would rest,

when my work on earth is done,

At the endless blue horizon

Got to know you through the legion and shared your like of karaoke. We did an Islands In The Stream or two. May you Rest In Peace and my deepest condolences to your family. Sail on sailor!

Met your Dad through the Legion and then in the past few years
our medical appointments seemed to land on the same day.
How proud you must feel - he treated everyone with a huge smile and
just a little hint of devilment that I
i detected. Your dad will never be
forgotten. My very sincere sympathy..

RIP John.
The Hanover Legion was where I always saw you. You had a smile that lit up the room.

Our deepest condolences to your family.

We feel a long way away from most of you at this sad time, but would like to send you all our heartfelt condolences at the loss of your dear son and big brother, John.
We are thinking of you Althea and Dini and especially Ann.
Much from New Zealand. Deirdre and Ed

My sincere condolences to the family. It has been a privilege to have met and worked with John.

I am shocked to read the sad news of John passing away. Our families have known each other for a lifetime. I always enjoyed the comments John would post on Facebook when I posted something. Thinking of everyone and my prayers are with you as it's so hard to lose a sibling .

My Deepest Condolences to John's family, although I never met him in person, he was a great character that I enjoyed having banter with over the RCN Veterans facebook page, he was to me a shipmate, I was looking forward to meeting him in September, but now have to wait until we meet in that big ship in the sky.
May you Rest in Peace
Neil Clancy
Ex- Chief Petty Officer Stoker R.A.N.

Members of the Royal Canadian Naval Association Niagara Region send their condolences. John will be missed at our meetings he all ways attended by zoom since he moved to Hanover His name will be sent to be put into the book at HMCS Sackville Memorial Book in Halifax

My condoleances to the famili, I am a cousin of John his mother is an eldert sister of my mother.

So sorry to hear about the passing of your dad Lisa. Our sincere condolences to you and your family.

Farewell my friend. Good times, good memories. You will be missed.

Sending our sincere condolences. John was a dear friend and will be missed every day.

So sorry for your loss Lisa,Rainer,Hayden, and family. You Dad enjoyed every minute with his family. Hugs from our family to yours

My thoughts are with you all. John was a true sailor and a wonderful person who will be missed.

My sincere condolences to family and friends. You will be missed by many. RIP.

May You Rest In Peace, My Friend. You will be dearly missed.

I was glad for our renewal of friendship, see You at a later date more than likely. Rest in Peace John.

RIP John . You will be missed

John please r.I.p. you were all ways so good to me at the legion